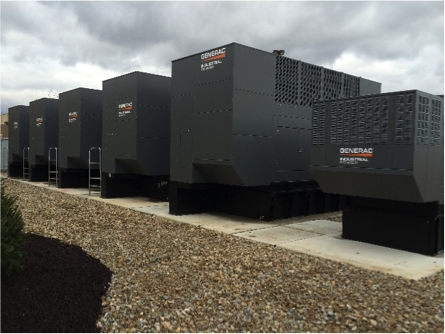 Generator Systems was contacted by a construction manager working for Adam Building Company in order to gain our assistance in reducing their emergency power budget for the Northfield Park – Hard Rock Rocksino project. The initial budget was approaching $2.0M and they were exploring different options to reduce their costs associated with their emergency power system.

Most significantly, by utilizing the Generac Industrial Power Modular Paralleled Solution, we were able to reduce their emergency power costs by over 50% when compared to their initial budget. In addition to the cost benefit, the owners appreciated the other benefits that come with the modular power system; redundancy, scalability, efficiency, ease of maintenance, lower cost of ownership, and site flexibility.

Since the original project completion, an additional 1,500kW of emergency power has been added to the system. This was easily accomplished due to the intrinsic benefits of modular power that allow for scalability for future expansion of the system.

In the end, the total value of our Modular Power System provided substantial costs savings and other valuable benefits. Hard Rock Casino’s and Adam Building Company made the decision to purchase Generac Industrial Power’s MPS system based on the total value package of the emergency power solution.