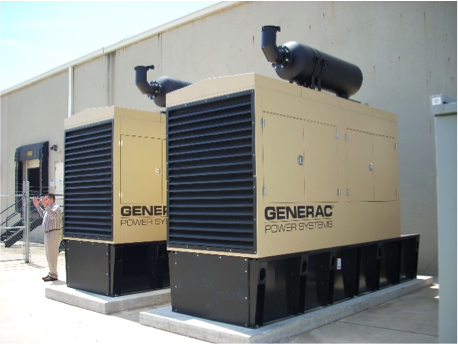 E-Commerce was in the process of relocating their operations from out of State to a new facility in Columbus, Ohio. As a web hosting business, their infrastructure consists of many rows of industrial grade servers, all serviced by dedicated HVAC units. When commercial power is lost, they have precious time before those servers begin to crash.

Due to budgetary constraints, E-Commerce planned to purchase a used 2 MW generator with no warranty. Fortunately, through a referral they were introduced to Generator Systems, Inc. (GSI).

Generator Systems presented a paralleled generator concept based on Generac’s Modular Power System (MPS) capabilities. Initially there was resistance based on industry bias against this technology. However, GSI was able to provide a live demonstration using a mobile demonstration system. The MPS concept was easy to view in this manner, and the benefits were clear.

While learning the customers’ overall needs, GSI discovered 2 MW of backup power would not be needed until later stages of a planned expansion of the new facility. GSI was able to provide an N+1 system, providing 100% redundancy using two 500kW diesel generators for substantially less installed cost than the used 2 MW system previously under consideration. At the same time the solution allowed for the future planned growth by provisioning for the addition of more generators at a later date.

Additionally, the MPS system was sold with a comprehensive, extended 5-year warranty and preventative maintenance and service plan in order to guarantee E-Commerce’s maintenance costs up front.

E-Commerce was able to save substantially on their capital equipment investment, while implementing a dramatically more reliable standby power solution to meet their current needs, while maintaining scalability for the future.